Another bright sunny Autumn day is closing with a beautiful sunset as I write this. The promise of rain earlier in the week only brought a tiny drizzle. While our entire state California is concerned about the long, drawn-out drought and it’s consequences, not many of us are looking at the invasive plants, or weeds that are lurking in the corners, or even in plain sight, on our property. These weedy plants are sometimes deliberately planted by homeowners but usually not. These invasive plants are taking advantage of their location by sending down deep roots, taking up water at a rapid rate, often at the expense of the other plants in the landscape.

First of all, what are these invasive plants? Are they weeds? And where did they come from? Though there are many answers to these questions, however, here are some basic definitions:
a weed, by the latest Webster’s definition is: “a plant that is not valued where it is growing and is usually of vigorous growth”; in other words, an unwanted plant, whether native or non-native.
An invasive plant, however, is usually non-native, of vigorous growth, and can overtake the habitat of other more desirable plant species, whether in your garden or in the wild. This can be detrimental not only to your landscape, but to insects, birds and other wildlife that depend upon native plants for their survival. Some invasive plants found in California, such as Yellow Starthistle, Tamarisk, or Scotch Broom can grow so densely and cover such large areas they create a monoculture that crowds out native plants and effects an entire ecosystem.

Invasive plants can not only take over your landscape, but they are often very thirsty, taking up water meant for your more desirable plants. With the cost of water surely to go up, this is a good reason to look for, and eliminate invasives. For instance, the Tamarisk, or Salt-Cedar tree, has invaded the banks of the Colorado River, estimated to take up over 68 billion gallons of water a year.
Many organizations, including local, state and federal governments have spent a considerable amount of time and money eradicating invasive plants within their jurisdictions. The Tehachapi Resource Conservation District assisted in this effort for Tehachapi Valley by sponsoring a successful Yellow Star-thistle eradication program, through grant funding and a fee-for-service program, from 1998 to 2009. State budget cuts reduced available grants for weed eradication, resulting in a lack of funding for this program.

How do invasive plants take over a landscape so rapidly? Most invasive weeds are non-native plants from other parts of the world. They were brought here decades or even centuries ago, sometimes without a traveller’s knowledge. Seeds for invasive plants may have been mixed in with the seed supplies immigrant farmers brought over to plant new crops in the new country. Some seeds stuck to clothing, the bottoms of shoes, or even the fur of domestic animals. Weed seeds are often eaten by animals and spread through their droppings. These plants, relocated in an environment lacking

their natural predators, flourish and multiply without controls to their spread. Many of these plants are from countries bordering the Mediterranean Sea, with a very similar climate as our own in California, giving these invasive plants a clear advantage.

So what invasive plants does a homeowner want to look for? There are many found all throughout our Tehachapi Valley, and six are described here: 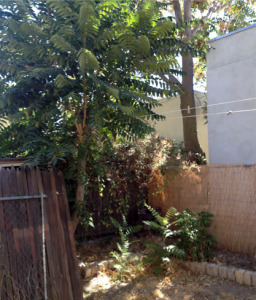 Tree of Heaven, Ailanthus altissima, spreading from a downtown church yard to a neighboring back yard.

Tree of Heaven, Ailanthus altissima, is quite invasive. It was brought over from China in the 1700’s, and was considered a horticultural shade tree. Unfortunately, it has no natural predators, produces numerous seeds, produces root sprouts and a chemical that prevents other plants from establishing nearby. 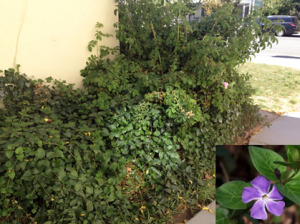 Periwinkle, Vinca major, alongside a walkway, downtown Tehachapi. Note how it is spreading across the rosebush planted nearby. Periwinkle flower inset.

Periwinkle, Vinca major: A spreading vine with blue-purple, circular flowers from Southern Europe/North Africa. The stems spread quickly at the nodes, if irrigated. If pieces of stems break off, they will sprout where transported. They are found alongside streams or any wet area, and often spread from yard waste dumps. 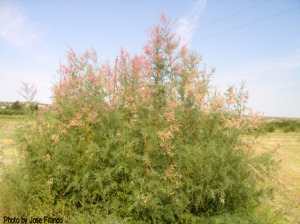 An example of Tamarisk, Tamarix ramosissima growing in the Southwest U.S.

Tamarisk, Athel or Saltcedar, Tamarix ramosissima, or other species: A large shrub or many branching tree with feathery, scale-like leaves. Flowers are small, pink to white sprays, producing huge quantities of seed. Though not generally found in Tehachapi gardens, they were planted as windbreak trees in the past. They spread rapidly especially in dryer regions, causing salt deposition, and taking over riparian habitat and increasing the frequency of fire. A healthy stand of Tamarisk can be seen at the lower end of Sand Canyon, east of town on the south side of Hwy 58.

Russian Thistle/Tumbleweed, Salsola kali, S. tragus, or S. paulsenii: This annual shrub, found in the Goosefoot Family, is all too common in vacant fields and roadsides throughout California. It spread from South Dakota, accidentally brought from Russia in the mid-1800’s in a shipment of flax seed. When the mature plant has finished producing seeds in late summer, early fall, the plant breaks off at the main stem base to tumble across fields in the wind, dispersing thousands of seeds as they go. Tumbleweed plants are also the host of a leaf-hopper agricultural pest, and also a virus that can infect sugarbeets, tomatoes, melons and other food crops. Cattle can graze on young, more tender tumbleweed plants as a method of eradication. 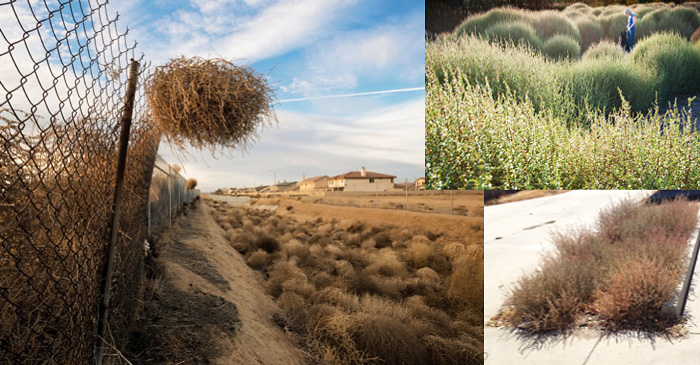 Burr Ragweed, Franseria dumosa, Ambrosia acanthicarpa, or other species: Another widespread plant or small shrub, found in the Sunflower family. The pollen of Ragweed is the source of many human allergies, as many sufferers can attest. These plants thrive along roadsides, driveways, and the edges of many gardens or irrigated
sites, or wherever there is even a hint of water. They can become troublesome in irrigated Agricultural fields where new crops have been planted. Seeds can persist through the winter months to reseed in the spring. 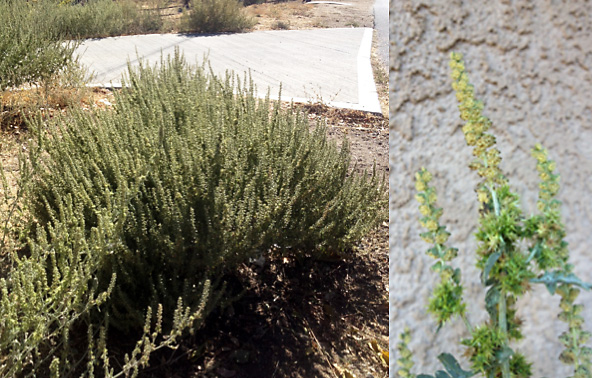 Yellow Starthistle, Centaurea solstitialis: Also within the Sunflower family, this annual plant is one of the most invasive plants in California, with approx. 10 million acres infected. It originates from the Mediterranean region of Europe and the Middle East, and was imported into the U.S. with alfalfa seed sometime in the mid-1800’s. Being a thistle, it can produce many seeds per flowering head. Though an annual, Starthistle is very long lived, sprouting in late winter and producing flowers well into fall. It spreads mainly by attaching to the wheels and undersides of farm and construction equipment, and through contaminated hay. It can spread very rapidly over cultivated fields within 2-3 seasons, and takes up large amounts of water, estimated to result in up to $75 million a year in water conservation costs. This is one reason the Tehachapi RCD decided to sponsor Yellow Starthistle eradication in 1998. More information about Yellow Starthistle eradication can be found at the Cal-IPC website, CDFA, their “Encycloweedia” and many publications, such as the “Yellow Starthistle Management Guide”, found at their link: https://www.cal-ipc.org/ 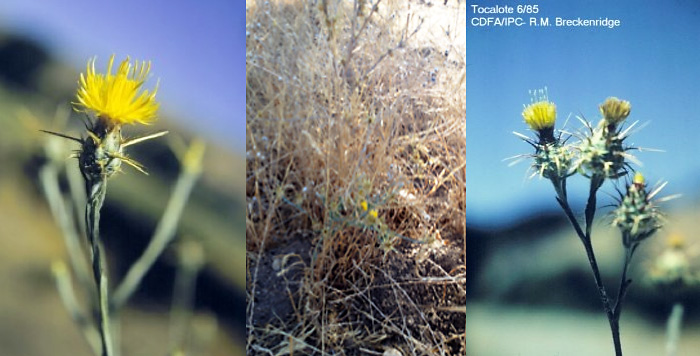 Some plants, however, that appear to be invasive, are actually “pioneer plants”, natives that are the first to revegitate an area that has been disturbed or degraded by overgrazing, mechanical cultivation, grading, or fire. Some of these plants are:

These native plants, often have deep roots, many seeds, and as in Rabbitbrush, will root sprout after a fire. Fiddleneck seeds remain viable for several years and will sprout rapidly after soil disturbance or fire. All of these plants will allow other plants to establish behind them over time, and as in Lupines, members of the pea family, will add valuable nitrogen to the soil.

So take a look at your landscape, check out available lists of invasive plants (see sources below) and see if some can be replaced with non-invasive, or native plants. Often, however, homeowners find invasive plants, or weeds, on their landscape they did not plant. They can appear alongside driveways, curbs, or the edge of your planting box. They grow rapidly, and should be removed. Impervious surfaces such as along roadsides or driveways act as small water reservoirs, keeping water at a higher level then the surrounding bare soils. It is best to remove invasives by hand, pulling out the roots if possible. Mowing is faster and easier, but this may encourage weeds to re-sprout at the root base. Using a localized herbicide should be used with caution and following instructions, as herbicide chemicals may affect other nearby plants, wildlife or your pets. If you find invasive plants or weeds that are spreading beyond your property boundary, you might consider replacing them with a native plant, or other non-invasive garden variety. For more information on non-invasive garden plants, please check out PlantRight at: http://www.plantright.org.

There are many other weedy invasive plants residing within our valley such as Tamarisk, Yellow Starthistle, Tumbleweed or Russian Thistle, and Burr Ragweed…more plants than can be discussed in this article. Besides PlantRight, Two other very good organizations to check out are the California Invasive Plant Council, or Cal IPC, at: http://www.cal-ipc.org/ip/, and the Invasive Species Council of California (ISCC), at: http://www.iscc.ca.gov. A local agency, sponsored by Cal IPC is our own Kern County Weed Management Agency (WMA). For more WMA information, you can check out a link on the Cal IPC page, or you may email them at: agcomm@co.kern.ca.us.