Authorization, History and Biography with Current Goals and Priorities as of 2010

The Tehachapi Resource Conservation District (TRCD) is situated in the Tehachapi Mountains separating the southern San Joaquin Valley and the Mojave Desert.  Elevations within the district range from 2,500 feet above sea level to over 8,000 feet above sea level in the higher mountains.  The TRCD comprises approximately 403 square miles (~258,000 acres), which includes the Tehachapi Valley and encompasses several other smaller valleys and canyons surrounding it.  This area specifically includes the Tehachapi Valley to the north, east and west of the city, Bear Valley, Brite Valley, Cummings Valley, Sand Canyon, and Cameron Canyon.  The current boundaries of the TRCD are shown in Figure A below. 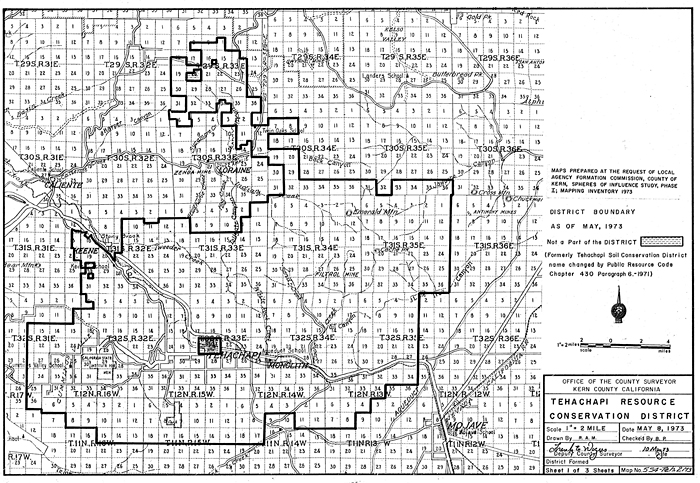 The Tehachapi Resource Conservation District is an independent special district authorized by Division 9 of the California Public Resources Code and was formed in February 1947.  Five annexations expanding the TRCD boundaries have occurred since its initial formation 1947.

The District is governed by a volunteer five-member Board of Directors (Board) and a varying number of volunteer Associate Directors.  The Board is comprised of resident landowners who are familiar with the local resource issues and problems.  The Board plans, directs, sets policy, establishes priorities, evaluates resource conservation and development tasks, and guides implementation of the TRCD’s programs.  The Board normally meets on the first Wednesday of each month at 6:30PM.  Pursuant to the Brown Act, agendas are posted on the office door and in the local newspaper prior to each meeting.  Public comments are encouraged at the Board meetings.

In 1948 the TRCD requested a preliminary survey of flood and erosion conditions which resulted in the first warnings of a potential water shortage coming in the Tehachapi area.  The TRCD monitored the problem over the next 12 years and then took additional action in the early 1960’s with the support of the County of Kern and the City of Tehachapi.

In 1961 a Watershed Planning Project was commissioned for the TRCD with the effort led by Bob Jasper, a recent graduate of the California Polytechnic University at San Luis Obispo with a Bachelor of Science degree in Soil Science, who was hired to study the soil and water resources within the main water basins and watershed of the entire Tehachapi area.  This resulted in a determination that the local water basin was being overdrafted and, subsequent to the recommendation of a “Citizens Advisory Group”, resulted in the formation of the Tehachapi-Cummings County Water District (TCCWD) in 1965.  Mr. Jasper headed the TCCWD from 1965 until 2007.

Soon after the formation of the TCCWD, the water district was able to gain an entitlement to import water to the Tehachapi area from the State Water Project aqueduct near the Grapevine and a sophisticated water system was constructed to transport the water from the San Joaquin Valley floor up the mountain to the Tehachapi area.  Without the TRCD and the TCCWD, there would have been no development in Tehachapi, Golden Hills, Stallion Springs, or Bear Valley Springs beyond the 1960’s.

District Programs:  Through the last 50 years, the TRCD has offered a wide range of programs for the district and surrounding region.

Tehachapi Flood Control Project:  In 1983, initial PL566 congressional funding was obtained for a flood control project to protect the City of Tehachapi.  This project was made possible through the efforts of the following sponsors: Tehachapi Resource Conservation District, TCCWD, USDA Soil Conservation Service, City of Tehachapi and the Kern County Water Agency.

These projects have protected the City of Tehachapi from major flooding since they were constructed and have allowed for continued development in the downtown area without threat of a repeat flooding of the magnitudes seen in 1945 and 1983.

The Yellow Starthistle Spray Program:  From 1998 through 2009, the TRCD sponsored a successful Yellow Starthistle (Centaura solstitialis; YST) Control Program.  This program has been promoted by an intensive campaign of public education through newspaper articles, workshops, mailings, signs, and word of mouth.  The TRCD YST eradication program resulted in the development of an extensive public relations campaign, a mapping project, adopt-a-park / adopt-a-road programs, and follow-up evaluation studies.  For a number of years the District received much of its revenue through this program but funding  the program became increasingly difficult starting in 2007 due to tightening state and county budgets and reduced funding available for weed eradication programs.  The YST program ran for 12 continuous years – from 1998 through 2009 – and treated an average of over 1,000 acres of private land and county roadsides per year during that time.  The program was suspended in 2010 but the District hopes to revive it again in 2011.

The Antelope Run Restoration Project:  Antelope Run is a natural seasonal stream that is also fed by the Antelope Dam primary spillway during rainy periods.  Antelope Run suffered from severe erosion and had a high potential for flooding – in particular at three critical road crossings of major road arteries.  In 2004, the Tehachapi Resource Conservation District and the City of Tehachapi co-sponsored a project that was led by the Tehachapi Cummings County Water District.  That project improved the channel with a number of innovative drop structures, replaced one of the critical road crossing structures, replaced vegetation in the area, and created a multi-use trail in part of the easement area.

Erosion Control Programs:   Since its inception, the District in cooperation with the National Resource Conservation Service has worked hard to conserve soil and control erosion within the District.  Through the years, workshops have been sponsored to educate local community service districts and landowners in erosion control practices.  In addition, the TRCD has supported implementation of erosion control practices such as:  check dams, rock riprap placement, channel treatments of various types, and other erosion control measures on ranchlands and new housing construction sites.  In 2010, the TRCD, in cooperation with the Desert Mountain Resource Conservation and Development District, won a grant from Southern California Edison Corporation  to develop an “Erosion Control Guide for Desert Mountain Areas”.  This guide was developed in order to facilitate the implementation of sound erosion control designs and practices by  the rapidly expanding wind energy industry and others developing or maintaining land in the brittle desert mountain ecosphere. An initial workshop was held in Jaunary, 2010  for local stakeholder input.  Among participants at the workshop were Lorelei Oviatt, Director of the Kern County Planning Department, local wind energy operators and developers and homeowners.  A second workshop will be held in December 2010 with the specific intent of using this guide to assist recent victims of the Old West Ranch Fire that occurred within the TRCD boundary in the summer of 2010.  Another workshop will be held in early 2011 with the primary focus being to assist wind farm and other land developers in the area to utilize this guide successfully.

Changing Role of the TRCD:

Starting in the 1980’s and accelerating in the first decade of the 21st century, issues relating to farming and ranching in our district have become somewhat less prevalent as urbanization of the City of Tehachapi area has accelerated, wind energy development has blossomed on the ridges and desert areas in the southeastern portion of our district, and residential development has spread to former farming and ranching areas surrounding Tehachapi.  However, rather than reducing the need for the TRCD services, this change within our district has opened many other opportunities for our board to help our district continue to keep a focus on soil and water conservation.

The TRCD works with many different agencies to implement projects or educate residents of the District.  Examples of past partnerships include association with the Tehachapi-Cummings County Water District for the construction of the aforementioned flood control project and the Antelope Run Project; the Desert Mountain Resource Conservation and Development District for the recent erosion control guide, the Kern Weed Management Area on various weed management projects, and the Natural Resource Conservation Service via an MOU between the TRCD and the NRCS for the NRCS to provide technical assistance to the TRCD and landowners within the District.  Other past and potential future partners include the City of Tehachapi, Bear Valley Community Service District, Golden Hills Community Service District, and the Stallion Springs Community Service District.

Other Accomplishments of the TRCD:

The TRCD has adjusted our focus as the needs of our district have changed.

As time has moved forward, our values have stayed very consistent with those that guided our board during our formative years over 60 years ago.  Those original values included:

In addition, over the years we have added additional values.

The TRCD has multiple financing constraints.  Most of the TRCD revenue is currently met with limited property tax revenue and the remainder is met with a small overhead share from the various programs we have run.  The TRCD is therefore only able to pay for part-time administrative staff and has been unable to fund a manager position in recent years.  A small paid administrative staff would help us to better provide public outreach and to seek funding for and implement other critical programs for our District.

Though we have great intentions and expectations, all of our efforts must take into consideration additional challenges we face in our District such as: